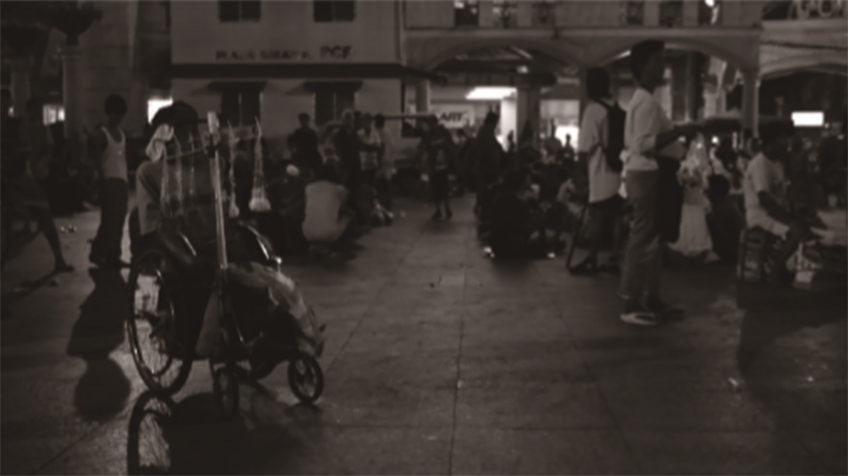 An Investigation on the Night that Won’t Forget

This film comprises two parts: Part 1, “Cradle of Memory,” which is over 56 minutes, and Part 2, “Cradle of the Night,” about 14 minutes long. Part 1 is reminiscent of Jean EUSTACHE’s interview with his grandmother for 110 minutes, filmed using two fixed cameras, in Numéro Zéro. Fixed on the outside of a small room with the door flung open, a camera records in a single take the story of Erwin ROMULO, a sound designer, film composer, and writer. However, unlike documentaries that employ a typical interview format, the interviewer is replaced with the camera’s perspective from outside of the room, as if secretly peeking at the interviewee who is sitting in front of a desk. Calmly, ROMULO recounts the circumstances surrounding the murder of his friend and film critic, Alexis TIOSECO and his girlfriend Nika BOHINC. To investigate the death of their friend, ROMULO and TIOSECO’s friends enlist the help of the National Bureau of Investigation (NBI) to probe into the questionable situation surrounding the death of TIOSECO, but they are only told that lots of deaths occur in Ampatuan, where the murder took place. In a society where neither the media nor the police are interested in finding out the true account of the incident, the moments of TIOSECO’s existence as recalled by ROMULO and the weight of his strange absence are combined and told as the history of a helpless individual. This discourse ends with the lingering poetic imagery in Part 2 (Cradle of the Night). Director Lav DIAZ refuses to employ a montage to avoid interfering with the discontinuous memory in the stream of consciousness of ROMULO’s lengthy account on a topic. Through the open pathway (the distance between the interviewee and the camera) within a fixed space, DIAZ relaxes the explicitness of the moment the camera confronts the interviewee. The two methodologies used to create an open discourse for the viewers ― moving beyond the framed space by gazing into it and calling attention to the whole by inserting poetic texts between parts of images ― make this simple documentary powerful and compelling. (KIM Eun-hee)