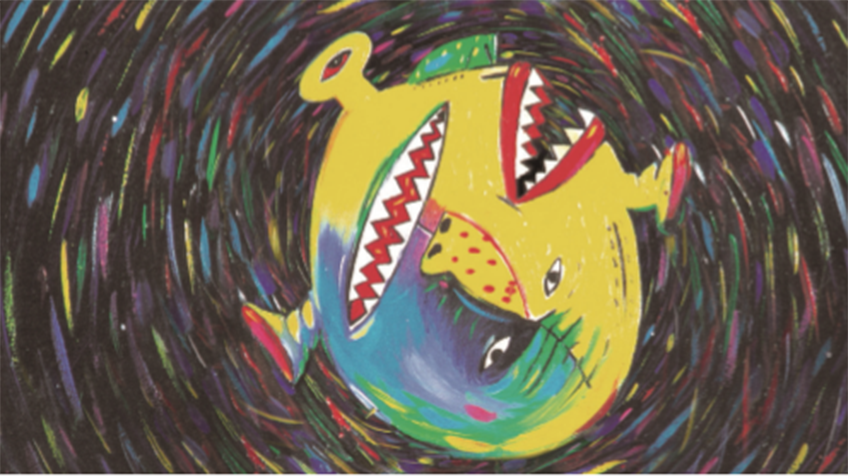 This documentary is about the life and works of Norman CATHERINE, an artist from South Africa. It is different from other usual biographical documentaries in that the director colors the biography and the works with the visual tone and the humor code similar to the artist’s. That is to say, the director’s interpretation is added. It’s like appreciating his sensuous exhibition on screen listening to a docent’s explanations. The director gives his cartoons and pictures movement with several animation effects, and emphasizes their senses of color with scenes of interviews in black and white and background images. These contrasting effects work as mitigators on darkness and cynicism and mischievousness inside human-beings and the awful images of split bodies in intense and rich colors. After works of his nightmares, odd imaginations about nature, and intense body images which are contradictory and contrasted between inside and outside, the film comes over ones with political circumstances in South Africa. As a facet of resistant arts in South Africa, they support and respect black people’s anti-government protests against Bantu Education Act in 1976, and denounce the government which enforced legal segregation with outspoken and violent images. With the obscene quality as usual compounded with political satires against the National Party, they are filled with stronger and more explosive speeches. The film is not focused on setting the position for him in the art history of South Africa or organizing his profile and works. Rather, it explores his childhood filled with many injuries, ways for the works to evoke his character of weirdness and warmness, and the light and darkness of mentality which he continually has been searching. Although his paintings, sculptures, and mixed media arts cannot be summarized into one word, his sense of humor and manner of dealing with works can be referred to as this one word, “Fook,” as he likes to use. Enjoy the “fook”ing arts for all 45minutes, which is not a long time at all. (HAN Song-i)