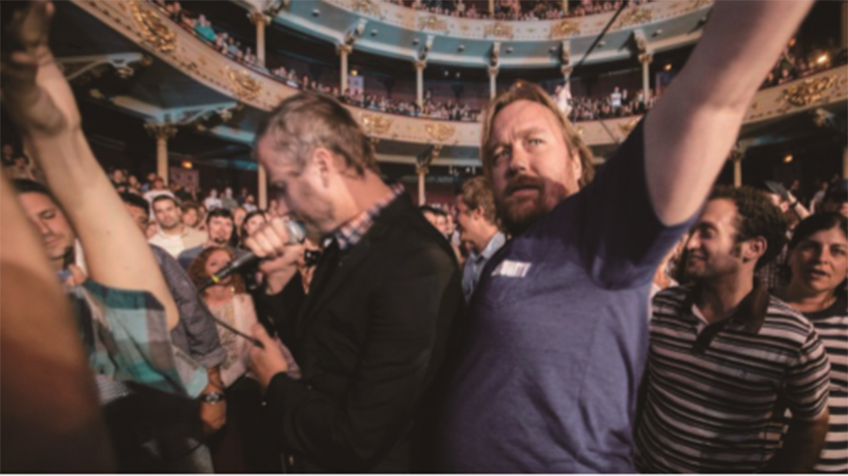 ‘The National’ is an American indie rock band popular with their last three successful albums. Its lead singer Matt BERNINGER employs his brother Tom as an assistant manager ahead of their world tour. Tom is a maniac for horror and action films and has made several short horror films, so he shoots the backstage of the concerts in Paris, London, and Warszawa. In fact, as The National’s “Mr. November” was chosen as a campaign song by OBAMA’s camp in 2008, it has built popularity through performances at OBAMA’s speeches. Matt had led his 9-year-younger brother Tom, to horror film mania, but gradually their interest was divided; modern rock for Matt, heavy metal for Tom. There’s no obvious aim to make a documentary film, though, Tom does improvised interviews with Matt and the other 4 members. He irritates Matt’s nerves by prying into Matt’s feeling about being in the band alone unlike the other members, because the band consists of Matt and two couples of brothers, and asking them strange questions. Eventually, Matt blows his top and fires Tom. Having come back to his parents, Tom hesitates before the shot images amounting to more than 200 hours. However in a dramatic switchover, it turns out that Matt gives Tom a hand again. This is a story about the trip of two brothers in very different characters. The director just simply follows pieces of reality chronologically. Subtly comical sense is ignited by the unusual combination of a young guy who is odd, lazy, and childlike and a successful rock star who draws fans’ and media’s attention all the time. Although a rock star is the main cast, it’s not a rock documentary. There aren’t guys shouting and head-banging under shining lights in front of a large crowd. Neither music making you shiver nor uproarious parties. The film honestly and plainly focuses on their brotherhood. You might find yourself cheering him up by following the entire course that a nerd completes his first feature film. Also there’re other pleasures of peeking into the private lives of The National, too. (JEONG Minah)