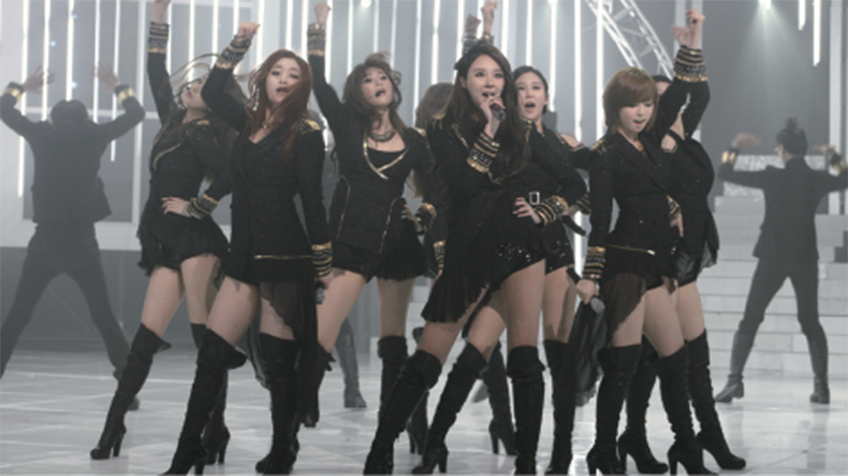 According to a recent news report, girl bands last for a minimum of one month and maximum of 12 years. On average, they last for ve years. This shows how harsh the world of K-pop is for idol singers, particularly that of girl bands. Their world is similar to that of a jungle. They strive to survive with all their effort, yet when their popularity wanes, they are weeded out of the celebrity world. This is the reason the members of girl bands receive vocal and dance training for years to build up their experiences. The documentary 9 Muses of Star Empire puts on the table, all the raw facts about 9 Muses, a Korean girl band, on their journey to make their TV debut. The lm vividly captures the ordeal 9 Muses went through. According to the director, the girls could not eat or sleep, and they endured the difcult period in the run up to their TV debut. Even after their debut, they continue to ght silent battles among themselves as well as with other girl and boy bands. Without ltering anything out, Director LEE Harkjoon records the birth and the growth of 9 Muses as a girl band, from their excruciating training with an intimidating vocal coach to harshly frank criticisms they receive in meetings. Also, through the interviews of the representative of their management company, their manager, stylist, and choreographers, LEE reveals to the audience the cruel reality of the entertainment industry. 9 Muses rush to performance after performance in a van, speeding over 160 kmph, the director subtly implies that if the girls don’t live fast and furiously, they will be quickly discarded. This is the girl band’s law of survival in the jungle of the entertainment industry. “Before my debut, I was innocent, but not anymore. This binds me, yet at the same time it frees me.” Inherently, the director’s perspective or opinion is reected in the documentary. 9 Muses of Star Empire paints a portrait of modern people, doing all they can to live, through the girls ercely practicing their performance over and over. This lm is a trans-medium between a documentary and a music video. The documentary also contains the lming of a 9 Muses’ music video, and it provides a chance for the audience to enjoy the members’ vivacity and liveliness at the beginning of their career. (JI Yong-jin)