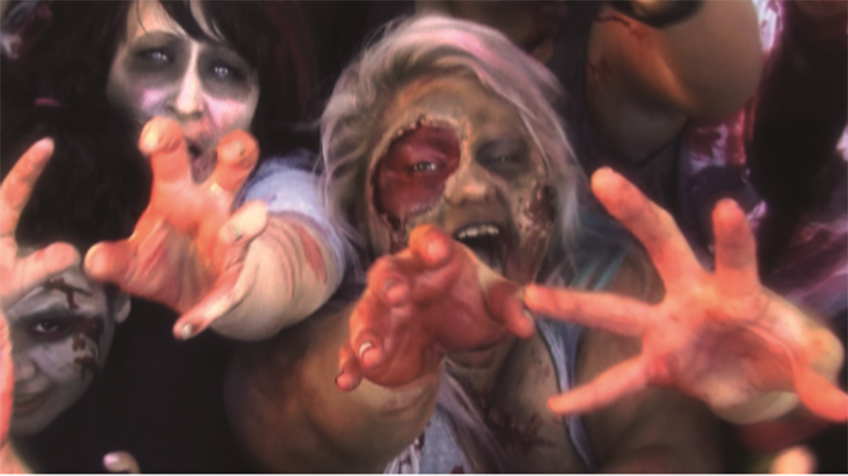 The word ‘zombie’ meaning ‘an animated corpse’ is known to have originated from a particular practice in West Indies whereby voodoo priests drugged people into a state of suspended animation and then woke them up to make them work as slaves, without subjective willpower or the ability to think for themselves. The popular image of zombies that we are familiar with was created in George ROMERO’s 1968 debut film The Night of the Living Dead. Since then zombies have been portrayed in a variety of ways in a number of films. The commercial success of Danny BOYLE’s 2002 film 28 Days Later, and Zack SNYDER’s Dawn of the Dead in 2004 proved the potential of zombie films, which had been regarded as class B culture in 1980s, as popular cultural products. Zombies then began to appear in mainstream popular culture. A zombie from a recent Hollywood film even falls in love with a human being (Warm Bodies), and in another film zombies transform into a virus that could destroy the humanity (World War Z). The recent international phenomenon known as the Zombie Walk spreading in many cities around the world has much to do with this rise in popularity of zombie films. The Zombie Walk could be understood as a zombie festival where people walk around dressed up as zombies. The first Zombie Walk took place in Toronto in 2003 with a mere six participants. Ever since, the phenomenon has spread to other cities around the world, now attracting more than 15,000 ‘living zombies’. Dead Meat Walking: A Zombie Walk Documentary is the debut work of director Omar J. PINEDA from Los Angeles, USA. It follows the Zombie Walks that took place in cities like Los Angeles, Pittsburgh, Toronto and Washington between 2011 and 2012. PINEDA’s interviews with the organizers and participants of these Zombie Walks as well as the actors and writers from George ROMERO’s zombie films, rabbis and Christian evangelists trace the origin and history of the Zombie Walk and consider its personal and social significance. If you have ever wondered about the reason why so many people, young and old stagger through the streets in gruesome zombie outfits and makeup, this fun and riveting documentary will provide a key to understanding the ‘zombies’ and Zombie Walk phenomenon. (JO Ji-hoon)