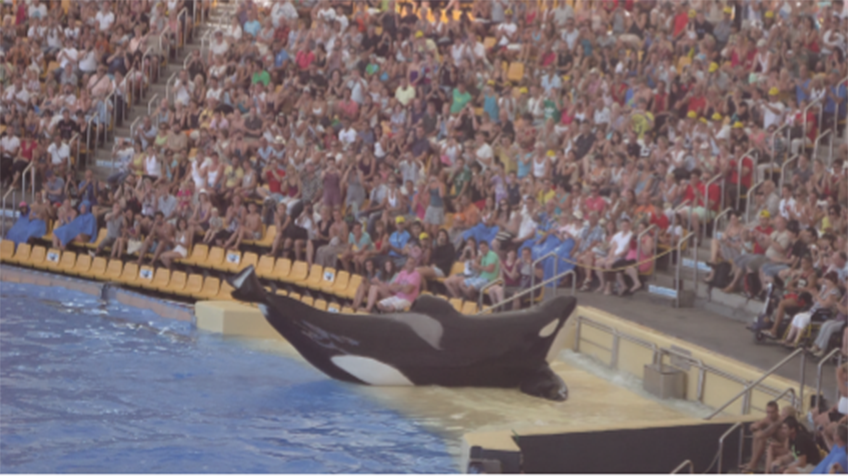 It is fascinating to see a huge orca whale lift his trainer up and perform a show. As they watch the whale show, the audience believes that the orca whale is a clever and friendly animal that shares friendship with humans. They mistakenly presume that the humans are taking care of the lovable creature. Yet, in 2010, a shocking incident occured, known as the “killer whale” Tilikum attack. Tilikum, a whale that used to perform in whale shows, kills his trainer at SeaWorld in Orlando. The director sets out to investigate this incident and finds out astonishingly that Tilikum has attacked trainers in the past, but SeaWorld kept silent about the accidents in order to continue their business. This film reveals who the true aggressor is by interviewing former trainers who quit their jobs in fear of their lives. The key issue of this incident is that humans have deprived whales, which are intelligent and sensitive higher animals, of their freedom for personal entertainment. The director captures the violent debate surrounding orca whales that are being sacrificed for animal shows, which have grown into a large industry. Honest interviews of former trainers and whale experts, images of trainers having fun while training the whales, and animation of simple sketches that reproduce the trial process are edited in cross cuts, bringing the audience into the midst of the controversy. Humans take advantage of the fact that orca whales live as a group. When they capture the baby whale alive, the mother whale is captured as well. Not forgetting his painful past, Tilikum has been taking revenge on the humans for years. Confronting the truth about this poor creature, which is smarter than some humans and understands what sympathy is, is painful. The film shows the cold facts of the horrible cycle of life, that the results of the humans toying with the rights of animals can only be harmful for the humans. Just as The Cove, which received the Academy Award for Best Documentary Feature in 2010, created a powerful sensation in Korea by reporting the tragic reality of whale hunting, Blackfish actively advocates the director’s wish for peaceful coexistence of humans and animals. This controversial film makes us think once more about the rights of animals in this tragic world, where humans oppress another species’ rights to pursue happiness for their fleeting enjoyment. (JEONG Minah)