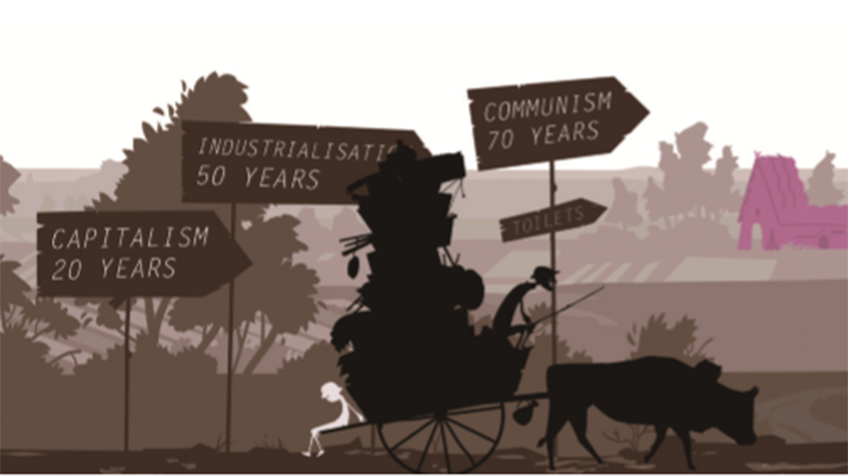 Poor Us: An Animated History of Poverty

This sensuous documentary compresses the history of human poverty of ten thousand years into a 60-min animation based on real people who have lived in different eras. Ben LEWIS, the director, recalls that the cinematic term Point Of View formed by the letters POV is also the three letters at the beginning of the word ‘POVERTY’ and in the director’s note he says that he developed this idea into a documentary which talks about the history of poverty from the perspective of the poor. To make an animation about the history of human poverty, the director read thousands of books in many libraries to learn about people who actually lived poor lives. Then he brings them back as main characters in the animation. He portrays Egyptian poverty in the 19th century, calls out beggars of medieval Paris, restructures a 17-year-old prostitute’s desperate life as a single mother in London and introduces anecdotes about China eradicating poverty. From each characters’ own perspectives, these multiple stories deliver the matter of poverty seriously and with consistency. In an era of excessive material affluence, this animated documentary as various questions of us. It seems proper to produce an animated documentary when the film covers periods where no real people are alive to have interviews with, nor existing films to refer to. It is true that animation has been used to deliver fantastic or fairy tale-like works, since animation requires the drawing of frames as opposed to film, which uses real photos as its frames on film reels. These days, however, animated documentaries have attracted attention from the film world and many great works have appeared. Poor Us: An Animated History of Poverty has won awards at a lot of recognized film festivals and has been screened on about 70 TV channels around the world, thus, the film’s cinematic quality and thematic consciousness have been positively recognized. Many of the animation techniques used in the film are also main points to pay special attention to. Various techniques using copperplate, woodcarving and photos create delicate movements and they enrich the theme of the film. If there is one thing needing in the documentary, it might be the lack of mention about the current situation of poverty in the world in comparison to the film’s in-depth coverage of poverty that’s historically portrayed in the film. (KIM Yoona)