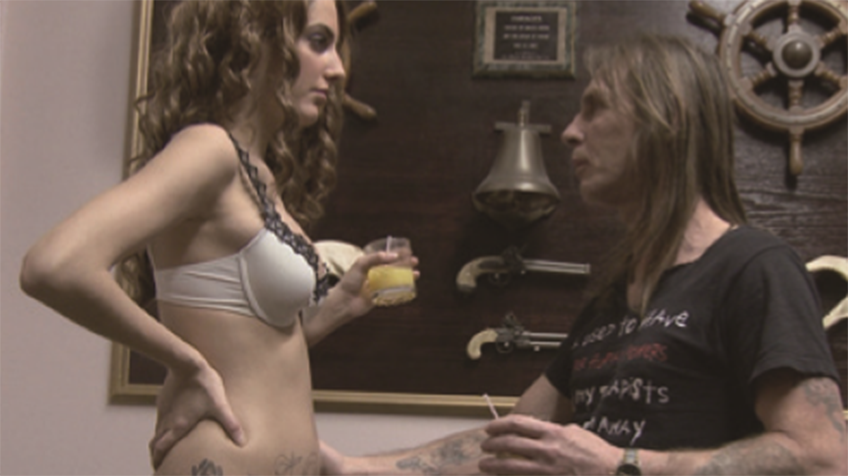 This is a family story of the director, which is interlaced with Club Manor. The family members, the mother and two sons, help their father who is a business man. The middle-class family looks very common, even peaceful. Like every other family, this family is a quite mismatch looking into furtively. After 30 years of taking over Club Manor and doing business as the last challenge, his father weighs 180kg caused by bulimia, and his mother is very skinny, as much as only 35kg because of anorexia, even though she is addicted to cooking. The father who cannot put his own socks on and the skinny mother who keeps cooking are very freaky to see. However, they actually don’t seem to be uncomfortable living together and don’t complain about themselves at all. So, is it because of his family? The director doesn’t look any bizarre when he sometimes sits or reads among naked women but he is rather in harmony with them. The Manor gets great criticism that it captures the portrait of a family best after Grey Gardens. The great advantage of this film is the director’s gaze as a family insider. The intimacy and openness that the director amazingly makes as a member of the family and a character of the film are steeped to this film as near as this documentary film is deluded into watching a sitcom or a feature film. In the meantime, he marvelously keeps a sense of distance, not with blowing whistle from the insider or confessing manner. He puts the position of himself as a son and a director into the film naturally. In the same context, the film doesn’t struggle to try and deliver something. It just shows the way of living of this family. Although the film can show that unique and disharmonious family might run into the ordinary family not different from any other family, it constantly focuses on to capture the director’s family. Because of this specialty, however, we are watching along the family’s daily life and their problem when we can meet ‘my special family’ involuntarily. We can recall ‘My family’ which cannot be generalized, and even further, the present situation of ‘My family’ flowing stitched by the name of ‘family’. When we think ‘They are very different from mine, but similar to either’, we can start to understand all of them, the father yelling something, the mother being stubborn not to get any treatment, the son feeling sorry for them and another son who is different. Because that is what the scene of our family is. (LEE Seung-min)