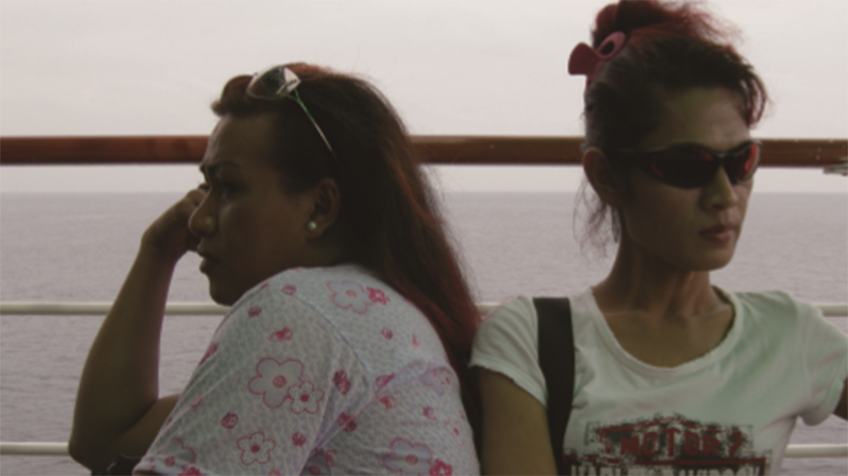 The greatest charm of a documentary is found in the unpredictability of its subjects. It is normally assumed that human lives can be divided into categories according to some objective facts such as gender, rank and status, level of education, and social class. However, more often now, we are taken aback by realities that completely overturn our assumptions. In addition, although one’s history and will power are considered important factors in judging our present and future, our expectations are very often proven utterly wrong. This film’s protagonist Muhamad Zein PUNDAGAU discovers that his sexuality was different from others when he was in middle school. His father was a devout Muslim who wanted him to become a religious leader. Although his father allowed him to choose his own sexuality after graduating from college, when he decided to become a transvestite, he got thrown out by his parents from their family home. He changed his name to Renita and started working in a beauty salon. Eventually, Renita left his home village and traveled to Jakarta to begin a new life. For twenty years after leaving his home village, he struggled to make ends meet on his meager income as a prostitute and a beauty salon employee. Since Renita was unable to improve the quality of his life, he decided to return home with a friend. He expects that his parents will not accept him for who he is but that his life back home will be much more prosperous than the one he leads in Jakarta. He also hopes that he will no longer be burdened by feelings of guilt by giving up living as Renita and going back to being Muhamad Zein PUNDAGAU. The first half of the film explores Renita’s life in Jakarta living in destitute poverty, and the next section, which makes up a quarter of the film, is devoted to showing Renita’s distinct sociability and the social status of transsexuals through Renita’s interactions with countless fellow passengers on his voyage back home. The story up until this point is predictable enough. However, the final quarter of the film that captures the events after Renita returns to his home village reveals wholly unexpected discoveries. Renita soon realizes it is not at all possible to achieve all that he has hoped for by coming home. He will certainly be much better much off than when he was in Jakarta, but the community that is he expects will ostracize him do something quite unexpected. The Mangoes is a captivating documentary that makes us realize that life is full of unexpected turns. (KIM Ji-mi)