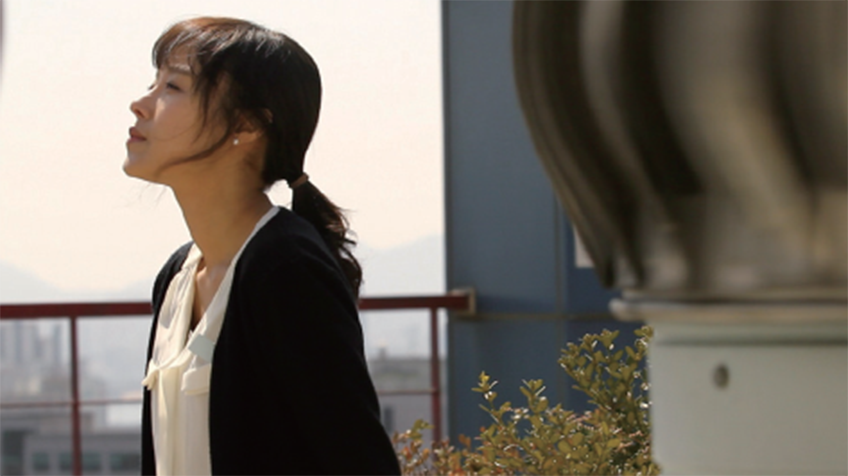 After lming Variety Survival Talkshow which had victims of sexual violence stand in front of a camera in order to console and sympathize with them, JO Se-young again challenges a taboo subject. The matter that the system and law of Korea denies although it is overtly prevalent, the religious world strictly condemns by its bioethical principal, that is, abortion. While the lm makes women who have endured wounds of abortion engraved both in their body and heart, remember and call attention to their memories again, Let’s Dance socializes this extremely private matter. The conservative and traditional frame stands rm against abortion. Premarital pregnancy has branded scarlet letters on women and a result that would be rarely accepted even in ordinary sex life has always been left only to women. Abortion has been a secret of women that has never been spoken to anyone and left as one’s own problem in private agony. In its position between revealing a heavy issue and protecting interviewees, the camera strategically takes both drama and documentary form. In documentary parts, we can directly hear from the women. It is the moment of numerous violence tangled within them and lost wounds within their body speaking. Meanwhile interviewees disclose their faces to resist with subjectivity against violence committed to women beyond rules and ethics. During the process of accepting their memories that were once denied, the interview for the lm becomes a performative tunnel. The camera wants to support their courage thoughtfully. Drama parts, on the other hand, are faithfully reenacted based on interviews with real women and the sequence conveys a process of an unmarried woman’s love, pregnancy and abortion focusing on her psychological anxiety and panic during her own experience going through her own body. After having an abortion, women have had to recover their body with a bowl of beef-bone soup. But now Let’s Dance suggests them to dance and announce freedom to everything that has imprisoned women. Co-directed by feminist directors, the process of lming is also worth paying attention to. (KIM Dong-hyun)