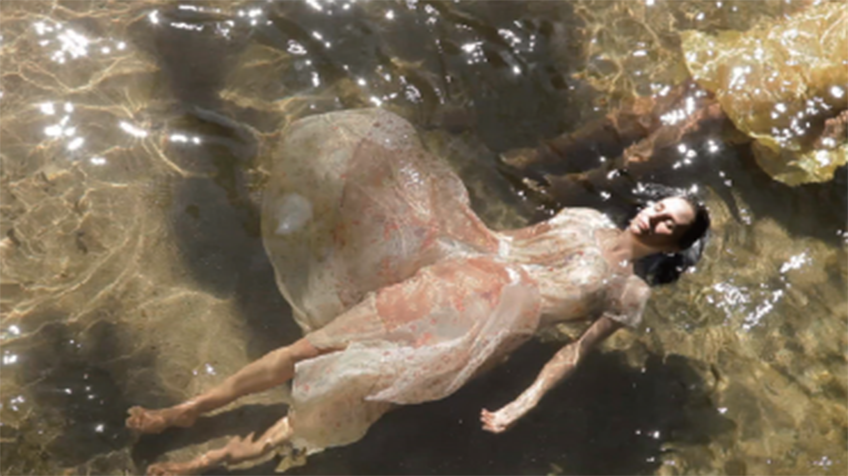 ‘Elena’ is the name of the sister of the director, Petra COSTA. Elena was born in 1970. Their parents were Brazilian left-wing activists against military dictatorship. Young Elena had to seclude with her parents for 7 years to save her life. Petra, who is 13 years younger than Elena, confesses that she doesn’t know how the time influences Elena. She just guesses that it might be hard for Elena to have any dream under the repression, unlike her parents who dream the democratization of their country or herself who has grown up in an atmosphere of freedom. Elena inherited her beauty and talent from her mother who used to dream of becoming an actress, so she had performed plays since she was 14 years old. However, she gave up on her own life in New York where she came for her dream. When Elena died, Petra was only 7 years old. She studied theater in U.S.A, as Elena’s wish for Petra to become an actress, showing Shirley TEMPLE’s films and The Little Mermaid. Petra and her mother can’t seem to let go of the memories about Elena, so they come to New York to find more information. Petra wants to have a conversation with her sister who said that Petra could meet Elena if she put a shell to her ear. She looks into video footages taken when they were young, the reviews on the play Elena starred in, cassette tapes of Elena’s voice mail from New York, her diary and so on. Petra’s narration confirming the absence of the present Elena, the presence of the absent Elena is mingled with Elena’s voice and their gesture overlaps on the New York streets. The image of water that appears at the beginning and the ending of the film is unlikely to be forgotten. The image of a woman floating on water, Just like Ophelia. The water is the grave of shadows in the first place, which death is accepted and the heart-broken memories are melted. However, after going through the trials that is seeking for life and death, the water turns to the image of life that is wet, but soft, and warm. “As Jung previously mentioned, the human desire is that the dark water of death becomes the water of life, the cold embrace of death becomes the embrace of a mother, furthermore, the sun that drowns in the sea reborns from the deep ocean again. Life can never trust death, ever.” - Gaston BACHELARD, complexe de Caron, complexe d’Ophélie, L’Eau et les Rêves (1942) (SHIN Eun-sil)