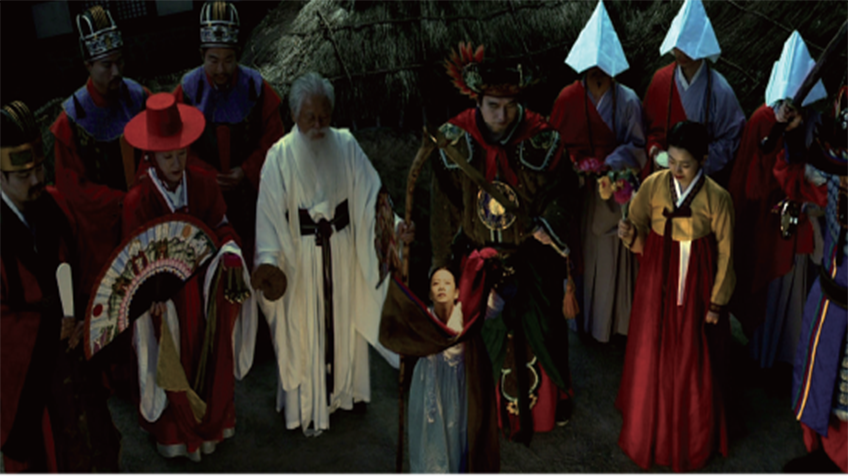 The word “Manshin” is an honoric term for a shaman. It’s a term that’s unfamiliar to many of us. In the modern history of Korea, where constrictive modernization has been the rst and foremost focus, shamans have long been regarded as symbols of all things outdated and superstitious and therefore, they have been the objects of continuous oppression and expulsion. On the day of an invocatory rite for a would-be spiritualistic medium, KIM Geum-hwa stated “In order to follow the divine path, I shall overcome many life-threatening obstacles”. Indeed, she did go through some near death experiences. In such a male-dominated world, she was nearly beaten to death for being a woman. During the Korean War, she was accused of being a Communist, deceiving the world and deluding the people. This resulted in her suffering threats of immediate sentencing. Even after the war, her oppressed life barely improved. Throughout such turbulent times, KIM buried her bitterness and sorrows deep inside, and continued to lead the life of a shaman, nursing the wounds of others for decades. KIM Geum-hwa’s life very much embodies the anguish of modern Korean history. Even when her oppressors looked to her for strength to cure their own pain, she extended helping hands without complaint. Living a life on the edge and serving as an intermediary between God and humans, she has earned the title of “National Shaman” and she has readily volunteered to cure the inner hurt of individuals and wider society, sometimes through tearful consolations and sometimes through divine orders. Perhaps it is only tting that director PARK Chan-kyong, whose works have focused on “the age of the Cold War and a divided country” has met with KIM Geum-hwa. Writer and director PARK has remained on the periphery of a lm industry that normally requires huge capital. PARK strives for innovation in cinematic discourse in order to deliver current topics on society via a sharp, artistic language. He now encounters a synthetic artist who has cured societal diseases at the frontier of society. As we witness the meeting of the two minds, we nd a moment at which the souls of the two artists interact with each other. This moment then offers a refreshing artistic experience and the joy of healing. I hope this lm offers an invaluable moment of healing to everyone in the audience. (MAENG Soo-jin)